On Voice, Listeners, and Francine Prose

A Wise Voice
It's not only what you say,
but the manner in which you say it.
It's not only the language you use,
But the tone in which you convey it.
Words come from the mind
And grow by study and art,
But tone leaps from the inner self,
Revealing the state of the heart.
---Author Unknown

I'm not sure what was the state of the heart of these guys, but their voices were truly loud and insistent this past Sunday morning. I kept hearing their call and thought they were a part of a flock flying overhead. But when the noise didn't go away, I went looking. There they were, on the barn roof next door. And they stayed a looooong time--and made A LOT of noise. What in the world were they doing? Who were they talking to? Who was listening?

Francine Prose poses similar thoughts on the writer's world in Reading Like a Writer, A Guide for People Who Love Books and For Those Who Want to Write Them. Chapter 5, Narration:

"The only way I was able to trick myself into writing a first novel, as well as the first short story I published that I liked...was to write both the novel and the story as stories within stories, narratives told by one character to another. Eavesdropped upon by the reader, the storytellers and their audiences appeared at the beginning and end of the works, and occasionally throughout, to interrupt and comment upon the action.

"The reason I say 'tricked myself' was that this device enabled me to overcome one of the obstacles confronting the novice writer. This hurdle disguises itself as the question of voice and of who is telling the story...when in fact the truly problematic question is: Who is listening? On what occasion is the story being told, and why...?

"...For me, writing framed stories not only answered all those troubling questions about the narrator's audience, but also neatly integrated the answers into the narrative itself. I knew not only who was speaking but who was being spoken to, where the speaker and listener were, when and why the event--that is, the telling of the story--was occurring. This permitted me to skip over slow parts of the plot by having the listener become impatient and hurry the narrator along.

"...Was it something that one character would tell another in the way that people tell stories about their lives? Would anyone imagine that these recounted events would hold another human being's interest, and would the reader believe that anyone, even a fictional character, would stay focused and pay attention all the way through?"

My geese friends may have been calling to others in the flock. They may have only been talking to each other. But either way they represented storyteller and listener to me, a necessary pair.

I'll approach voice from a different angle now, by way of a framed story--though I don't intend to climb the barn roof to do it. How about you, what would you say about the writer's voice? Do you have a listener in mind when you write?

Are You a Lexiphile? (Don't Worry, It's a Good Thing)

"Whoever says words can't hurt you has never got hit in the face with a dictionary." --author unknown

Did you know that those of us who love words have a name? We are lexiphiles.

I just learned that the other day.

Lexiphile (noun) : a lover of words; one who is fascinated by words and language...who derives pleasure from various uses of words...who appreciates the nuances surrounding different words; a person who is extremely interested in dictionaries and lexicography. Derived from the Greek roots for "word" and "love."

Doesn't the word have a nice ring to it? Sounds so, well, respectable!

All of this came to me after receiving a forwarded email the other day with the following list. There's no attribute to whoever compiled the list, but it's for sure someone truly loves to play with words to come up with such humorous combinations:


You can tune a piano, but you can't tuna fish.


To write with a broken pencil is . . pointless.


When fish are in schools, they sometimes . . . take debate.

The batteries were given out . . . free of charge.


A dentist and a manicurist married. . . . they fought tooth and nail.


Police were called to a day care where a three-year-old was . . . resisting a rest.


Did you hear about the fellow whose whole left side was cut off? . . . He's all right now.


The guy who fell onto an upholstery machine . . . was fully recovered.


He had a photographic memory . . . which was never developed.


Those who get too big for their britches will be . . . exposed in the end.


When she saw her first strands of gray hair . . . she thought she'd dye.

So, did you know you were a lexiphile (sometimes spelled lexophile)? How does it make you feel? Which of the above is a personal favorite? Any you could add?

Sites of interest on the subject of lexiphile:
Lexophiles--Are You One?
How to Cultivate a Love of Words
More Word Fun 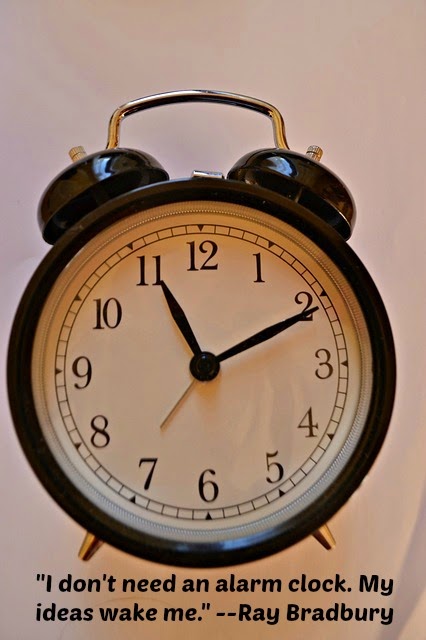 My latest, favorite toy: superimposing text on photos. Was introduced to the site picmonkey.com today while helping work on our church's website. Up to this time I haven't had a photoshop-type program on my computer to do this, so this is quite a bonus--free and everything.

I'm certainly still a novice, but the above is an example of the potential for more.

Hubby worries that sometimes I'm married to the computer, the amount of time I spend on it. Shhh, don't tell him but I've got another "project" area that will draw me here like a magnet!

Any "fun" sites you get lost in?

(And do we even have to discuss how distracting these things can be from our writing???)

For Mondays: 12 Motivating Quotes to Start the Week

"The creation of a thousand forests is in one acorn." --Ralph Waldo Emerson

A few thoughts on the power of the word one, as in: one thing leads to another. You find a quote that inspires, a beautiful photo (hats off to this photographer, isn't it a beautiful scene?), more quotes and you're off on a quest. What have others said on the subject of "one"?

"Success consists of getting up just one more time than you fall." --Oliver Goldsmith

"Ideas can be life-changing. Sometimes all you need to open the door is just one more good idea." --Jim Rohn

"Our greatest weakness lies in giving up. The most certain way to succeed is always to try just one more time." --Thomas A. Edison

"The best thing about the future is that it comes one day at a time." --Abraham Lincoln

"Life is one grand, sweet song, so start the music." --Ronald Reagan

"The secret of getting ahead is getting started. The secret to getting started is breaking your complex overwhelming tasks into small manageable tasks and then starting on the first one." --Mark Twain

"Enjoy the little things, for one day you may look back and realize they were the big things." --Robert Brault

"Growth is an erratic forward movement: two steps forward, one step back. Remember that and be very gentle with yourself." --Julia Cameron

"One song can change a moment, one idea can change a world, one step can start a journey, but a prayer can change even the impossible." --Unknown

In the same spirit of the word one:

[Wordsense suggests that this familiar quote might also be interpreted: "The journey of a thousand miles begins beneath one's feet."]

Anything here speak to where you are at the moment in your work? Any favorite inspirational thoughts you might add? What is one thing that helps you stay the course?