July's photo-a-day project came with a twist, an historical twist that is. My WIP, a middle-grade historical fiction, is set in mid-1800s Ohio. The challenge? Step back in time and attempt to capture images of things my character might have seen, smelled, tasted, touched, or heard. Such an exercise held out the promise of getting to know my character better.

And help bring her to life...

"It takes a long time (to write YA)...I have to let the characters live inside my head awhile. You have to know what's on your character's walls and what's in their closet--even if you're not going to use that in your book. It's a way of bringing your characters to life before they're on paper." --Paula Danzinger

"When characters are really alive, before their author, the latter does nothing but follow them in action." --Luigi Pirandello

"Once we have begun it, we continue reading a novel largely because we care about what happens to the characters. But for us actually to care about these actors in the drama on those printed pages, they must become real people to us. An event alone cannot hold a story together. Nor can a series of events. Only characters effecting events and events effecting characters can do that." --Elizabeth George, Write Away

So without further ado, here's July's photo gallery, sample images of what a young girl might have encountered in a similar month 150 years ago--except that they were captured through the lens of a 21st century camera! 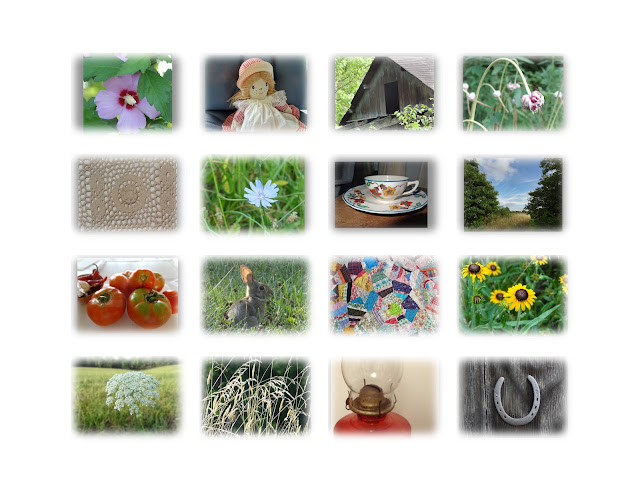 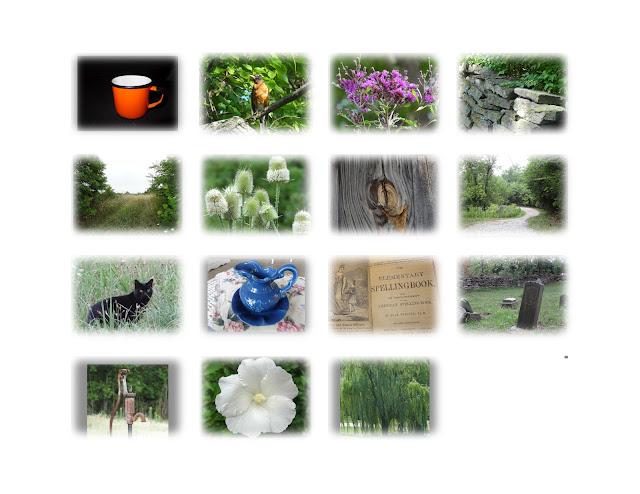 Of course I'd loved to have snapped a slew of others. A mule for instance. A hand-crafted checkerboard. A pontoon bridge and a hollyhock doll or two. But I'll leave that for the imagination--and the finished book :-) 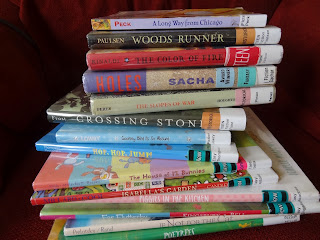 Library trips rarely turn out the way they're planned, do they? In a good way, of course.

My list on a recent excursion to the closest branch included a bunch of historical fiction titles I've been wanting to read (and picture books I thought the little ones might enjoy). A quick search on our library's website had indicated the titles I targeted were on the shelf where I was headed. As so often happens, though, the books were already checked out upon my arrival.

Never fear. It didn't make me want to throw books. On the contrary, there are enough books crying "pick me!" to take their place, new releases, titles I'd never heard of, eye-catching covers, or a title from a familiar author not yet read. I came home with a stuffed bag, including four middle grades, four YAs, five picture books, and two poetry books. I had to pull myself away from the stacks or else I was going to have to find a wheelbarrow to get them to the car.

In addition to the variety of genres in the pile, there was a wide variety of writing styles,too, including a novel-in-verse, first person POV, third-person past tense, third-person present, and--for the fun-lovin' lyrics--a rhyming book.

Yep, quite the grab bag. And, with all due respect to Mark Twain, I don't expect to use any of these books to steady a table or sharpen a razor. I plan to read them--and then go back for more 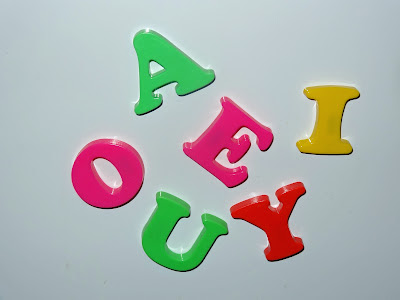 "A question on the run: What's unusual about unquestionably? Answer: It contains all five vowels and the letter y. I leave it to you to discover why facetious, abstemious and abstentious are collector's items." --James J. Kilpatrick

I've added this bit of trivia to my collection of English language absurdities and unusual facts. Find any word-loving tidbits for your collection lately?

p.s. Facetious (adj. "having the habit of joking") I sorta' knew. But abstemious and abstentious? Well, abstentious, it turns out, means the same as...abstemious. And abstemious? It means "sparing in eating and drinking; moderate." Confused yet?

So, are you going to be abstemious and abstentious this weekend? (She asks facetiously.) Hope your weekend is unquestionably super.

On Leeches and Weasels: The Problem With Qualifiers

"Don't hedge your prose with little timidities. Good writing is lean and confident...Every little qualifier whittles away some fraction of the reader's trust. Readers want a writer who believes in himself and in what he is saying. Don't diminish that belief. Don't be kind of bold. Be bold."--William Zinsser 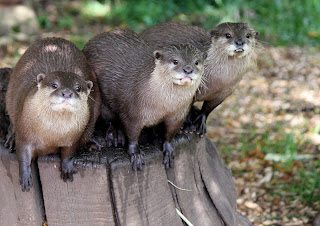 Not when it comes to the writer's world.

While such terms would be insults when speaking about a person, they characterize an important writing principle when applied to qualifiers, those words that "limit or modify the meaning of another word, changing how absolute, certain or generalized it is" (source).

William Strunk of Elements of Style fame makes the point vividly clear: "Avoid the use of qualifiers. Rather, very, little, pretty--these are the leeches that infest the pond of prose, sucking the blood of words. The constant use of the adjective little (except to indicate size) is particularly debilitating..."

Judy Delton, in The Most Common Writing Mistakes (And How to Avoid Them) explains: "A qualifier is something that takes a perfectly clear, decisive statement and weakens it. It is a wishy-washy word that drains strong statements of their validity. Qualifiers are words like just, even, like, although, also, besides, almost, maybe, if, but, too, unless, sort of....These weaklings qualify things so that a writer or speaker never has to take a stand, never has to make a decision. He can eat his cake and have it too, pleasing both sides. A new writer who is afraid of risks (anyway) finds them convenient and satisfying (sort of)."

Again, this time from the Writing Center, "Qualifiers and intensifiers are words or phrases that are added to another to modify its meaning, either by limiting it ('he was somewhat busy") or by enhancing it ("the dog was very cute")...Excessive use of qualifiers can make you sound unsure of your facts...writing that contains too many qualifiers can sound unclear and wordy."

Bryan Garner, author of Garner's Modern American Usage, calls the qualifying word "very" a weasel word..."(it) functions as both an adjective and an adverb, surfaces repeatedly in flabby writing. In almost every context in which it appears, its omission would result in at most a negligible loss. And in many contexts the idea would be more powerfully expressed without it."

I find the term "weasel word" particularly descriptive. Turns out it's not new to a writer's vocabulary. According to Wikipedia, the expression derives from the egg-eating habits of weasels. "An egg that a weasel has sucked will look intact to the casual observer, while actually being empty. Similarly, words or claims that turn out to be empty upon analysis are known as 'weasel words.' The expression first appeared in Stewart Chaplin's short story 'Stained Glass Political Platform' (The Century Magazine, 1900), in which they were referred to as 'words that suck the life out of the words next to them, just as weasel sucks the egg and leaves the shell." (More on weasel words here.)

It took me some time to understand how qualifiers negatively affect the impact of writing. But with edits, I've identified my worst culprits: seems, just, about, almost, all.

Ever done a "find" search to see how many qualifiers* you use? If you're like me, you're tired of the wishy-washy, weak words, and don't want your characters to be that way either. I'm all for pulling out those suckers, wrestling the weasels down, and shooting for more vibrant, powerful language. How about you?

*The most common qualifiers according to About.com: very, quite, rather, somewhat, more, most, less, least, too, so, just, enough, indeed, still, almost, fairly, really, pretty, even, a bit, a little, a (whole) lot, a good deal, a great deal, kind of, sort of.

"The best reason to write regularly, to keep working over drafts, and to experiment with exercises...is that they give the breath of inspiration more of a chance to slip into our lungs."
--John Drury


I came across the above quote in the introduction to John Drury's Creating Poetry. Drury's words are an inspiration in their own way, wouldn't you say? Give the breath of inspiration more of a chance to slip into our lungs. Ah. Such a thought is not just limited to the writing of poetry either, of course. Writing regularly breathes inspiration into the lungs of all writers, no matter what form their words take.

Drury continues: "Robert Frost noted that when his poems didn't work out, he called them exercises," and, if the word (exercise) bothers you, "if it makes you think of workouts and make-work and brain teasers, think of exercises as provocations, goads, triggers, or ignition keys."


Or...the breath of inspiration. Breathing is involuntary, instinctive. I'm aiming for writing to be more of a natural response as well. It's the best way to inflate the lungs of writing and make them more healthy. So I'll keep doing exercises. Prompts. Freewriting. Even take a stab at poetry. How about you? Are you inhaling inspiration through a regular habit of writing?