"When you reach for the stars you may not quite get one, but you won't come up with a handful of mud either." --Leo Burnett

I can't believe it. I hit a milestone and almost missed it. This is my 301st blog post.  Recognizing the big 300 almost passed me by.

But it's never too late, right?

Who would have thought when I started this blogging experiment almost five years ago that I would stay the course and still be here today? That's not to say I'm projecting forever. The day may come when the journey takes a fork in the road, energies are diverted in a different direction, but I do know that the reach has already gone further than I ever thought it would. And I don't believe I've come up with a handful of mud either!

The idea has made me consider the idea of reach--and reach's cousins: dream, desire, and risk. A little googling (isn't it amazing the new words that are added to our vocabularies each year that we'd never have considered before?) I came up with the following inspirational thoughts:

"Nothing is impossible. The word itself says 'I'm possible'." --Audrey Hepburn

"Only those who will risk going too far can possibly find out how far one can go." --T.S. Eliot

"Sometimes you just have to jump out the window and grow wings on the way down." --Ray Bradbury

"Every great dream begins with a dreamer. Always remember, you have within you the strength, the patience, and the passion to reach for the stars to change the world." --Harriet Tubman

"You are never too old to set another goal or to dream a new dream." --C.S. Lewis
(my personal favorite :-)

'It's impossible,' said pride.
'It's risky,' said experience.
'It's pointless,' said reason.
'Give it a try,' whispered the heart.' --Unknown

"You had the power all along, my dear." --Glinda, the Good Witch, The Wizard of Oz

1. Share links of 300-lists. (Considered coming up with my own list of 300-somethings, but reality set in and I nixed that idea--too big a reach right now!) Some lists from others to consider:


300 Greatest Films
300 Most Frequent Words Used in Children's Books
300 Reasons to Be Happy
300 Things Dr. George Washington Carver Invented from Peanuts (a partial list)
300 Top Christian Blogs on Ministry
300 Things to Do Once in a Lifetime (The Ultimate Bucket List)
300 Positive Words to Describe Your Children

2. Sponsor a celebratory give-away! Kicked around different ideas here, too, but settled on this: to one lucky commenter a $30 Amazon gift card will be sent your way! $3 wasn't a big enough celebration. $300 (as in 300 posts) was...ummm...too much of a reach! So 30's a good compromise.

Like previous giveaways here, all you have to do is comment along with a contact email address, and you will be eligible for the drawing. Deadline is this time next week, Tuesday, October 7. (I considered Monday, October 27--since that will be the 300th day of the year!--but that's too long to wait.)

300 posts of fun, of meeting people, of stretching, reaching, learning, engaging. That's what I'm celebrating. Hope you'll celebrate with me.

Forgive me for the poor quality of the above photo. And forgive me for doing yet another post on spiders (first one, here), but I can't resist sharing.

First, the photo. What you see is a picture taken from the open window of a speeding car, us going down the interstate at 70 mph. I almost lost a helium-balloon out that same-said window when I rolled down that window in an attempt to record what we were seeing.

And what we saw was truly spectacular. We were traveling north, hubby and I, on I-71 from Cincinnati to Columbus to celebrate my mom's 91st birthday. (I shared about her 90th here last year.) The day started out foggy, especially near the bridge crossing the Little Miami River. At times the sun broke forth, other times we hit more patches of fog.

At what mile marker did we first notice them? Not sure, but the sight caught the attention of both of us at about the same time. All along the roadside, and I mean everywhere--in the grasses, on the fences, in the gullies and on the rises--were what I could only describe as (for lack of a better description) feathery whirligigs. Delicate, filmy, ethereal, silver, glistening whirligigs. Fairyland.

"What are those??" we said, not knowing yet what would eventually dawn on us.

On and on the phenomena stretched. Mile after mile. Multiples and multiples of filmy designs. Thousands of them dotting and wavering everywhere. Could we count them? Impossible.

And then it hit us. We were looking at wind-spinning spider webs. For nearly a hundred miles, one after another after another. Can you imagine?

Lucky for me I had the camera. I rolled down the window (that's when we almost lost the balloon, but hubby saved the day, driving with one hand and grabbing the balloon with the other), and started snapping away. Sorry, not much to show for it, but maybe you get the idea. 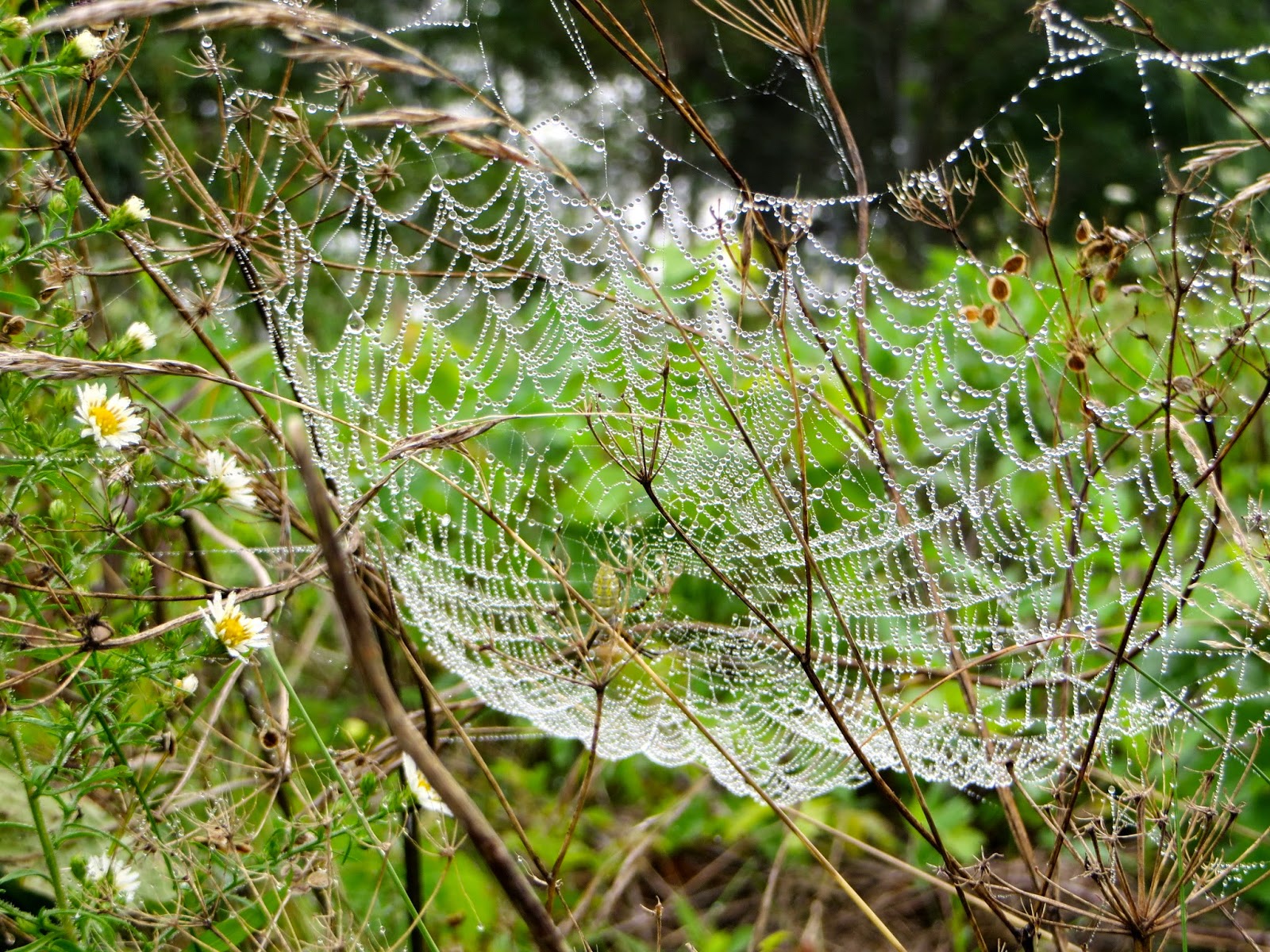 Later we stopped at a roadside rest. Picture two (ahem) not-so-young people dressed for a birthday party traipsing across the grounds of a highway rest stop headed to a fence row that bordered a field of overgrown weeds and dry corn stalks. Hubby puts up with a lot when I carry a camera! Traffic whizzed by, a groundskeeper trimmed, birds squawked. But who cared? We were on a mission. Here's an up-close shot of one web. 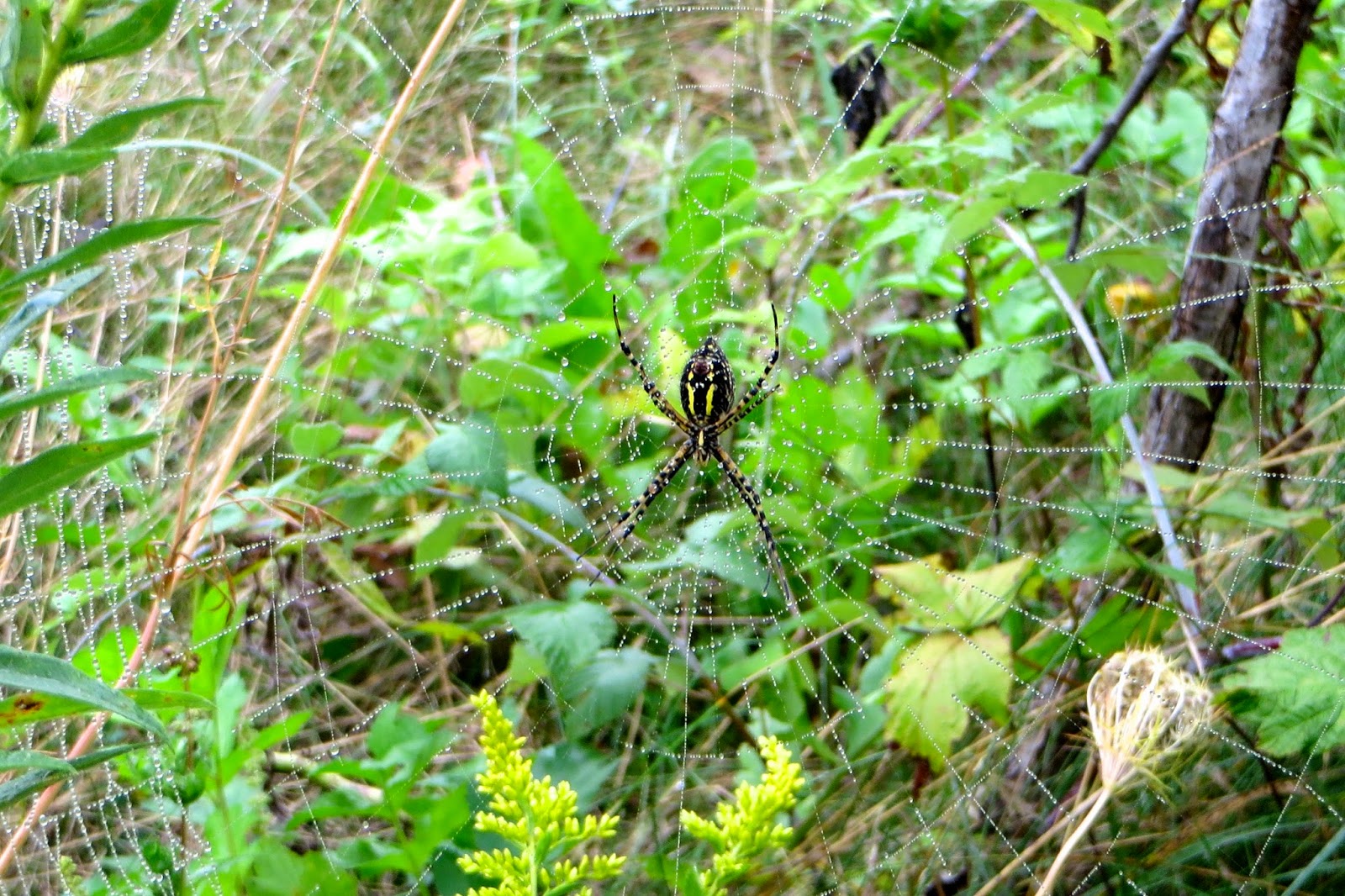 And here's a glimpse of the spider herself. Isn't she beautiful? I later learned she's a banded garden spider who, as an adult, spins her art from August to October, so we timed it right. Obviously, Ohio has a lot of banded garden spiders! And the spiders, hardly noticed until time and circumstances wove themselves together, created a most spectacular display and memorable experience. We still talk about what we saw.

That's my spider story of the week--and my inspiration. It has all the elements of good writing--timing, design, wonder. What's your story for the week? Anything inspire you or spark a sense of wonder for you?

p.s. Spider trivia: The spiders' insect-eating habits are extremely helpful to humans. "Every year, billions of spiders do away with a large number of disease-carrying and crop-destroying insects. If every spider ate just one a day for a year, those insects, piled in one spot, would weigh as much as 50 million people... (What??? Is there a way to verify this claim?)...Spiders are, by far, the most important predator of insects in our world." (This from Elaine Kalantarian, here.) Oh, the things you learn!

p.p.s. Would the banded garden spider be subject to the burden of unrealistic expectations in her work? I think not, but writers are susceptible to such pressure. A great article on just that, The Crushing Weight of Expectations, by Robin LaFevers at Writer Unboxed, addresses the idea. You might find it interesting as you seek to spin your own web of words.

And The Winner Is...

"Just living is not enough," said the butterfly. "One must have sunshine, freedom, and a little flower." --Hans Christian Andersen

If asked what we might add to Mr. Andersen's list of must-haves, what would be your answer? I suggest "friends"!

And with that lead-in, I announce the **winner** of my recent give-away contest of Jessica Lawson's delightful debut MG novel, The Actual and Truthful Adventures of Becky Thatcher (review found here)--blogger friend, and author in her own right, Karen Lange! Karen blogs over at Write Now, "exploring the adventurous writing life."

Congratulations, Karen. The book will be on its way to you here real soon.

Being Open to Inspiration


"The artist is a receptacle for emotions that come from all over the place; from the sky, from the earth, from a scap of paper, from a passing shape, from a spider's web." --Pablo Picasso

Just a bit of weekend musings after discovering the treasure pictured above on my walk.

Ever thought of yourself as a receptacle? What sparks emotion and inspiration for you? Might I suggest pausing for a moment to take in the intricacies of spiderwebs as a start?

p.s. There's still time to enter the drawing for Jessica Lawson's debut book, "The Actual and Truthful Adventures of Becky Thatcher." Check out the link and details here.