On Thorns, the Writing Life, and Henryk Sienkiewicz

"The profession of the writer has its thorns about which the reader does not dream."
--Henryk Sienkiewicz

Ah, I came across this quote after facing down the above thorn tree (actually a honey locust tree) on a recent walk. What do you suppose were Mr. Sienkiewicz's thorns?

I was not familiar with Henryk Adam Aleksander Pius Sienkiewicz until I came across this quote. I felt an affinity with him right away--what writer wouldn't? We're always grappling with the thorns so common to writing: doubt, insecurity, time management, procrastination, perfectionism, lack of focus, writer's block, rejection. These things prick us, worry us, bring us pain.

But Mr. Sienkiewicz? Turns out he was a well-known Polish writer of the 19th century. A journalist, Nobel Prize-winning novelist, and, later, a philanthropist. His best known work? Quo Vadis, a novel set in Nero's Rome, from which a movie was made in the 1950s.

He met with great success, it would seem. But he also endured his share of life's thorns, including a period of poverty, early death of his wife, political upheaval of the times. Yet today he is celebrated in Poland by statues in his honor, streets named after him, and a legacy of honored writings.

I think I read Quo Vadis as a teen. At least it sounds familiar, or is it only because they made a movie based on it that I might have seen years ago? Otherwise, I knew nothing of Henryk before coming across his quote. But now I feel an affinity with him, and not just because hubby's mother's side of the family came from Poland. But because he expressed a common struggle. The reader often cannot imagine the thorns the writer battles to get those words in print. The reader, it would seem, has the easier part.

Thank you Mr. Sienkiewicz, for initiating the discussion. Whatever thorns troubled you in your writing career, we can see you didn't let them stop you.

So, what writing thorns challenge you? What thorns poke and prod you so that your reader, unaware of the struggle, will enjoy the reading?

To me, we can interpret the photo in one of two ways. Ouch, don't touch! Or: appreciate the beauty of nature's sculpture. Perceived that way, thorns can be a positive, not a negative. A prod and not a deterrent. An incentive and a reminder of those things we need to be mindful of.

"If it weren't for the rocks in its bed, the stream would have no song." --Carl Perkins

How many times have we read about an historical figure, maybe picked up a detail here or there on their life, and moved on--never really engaging much in their story or giving it much thought. They might have been important or interesting in their era, affected the outcome of history in some way, but, well, ho-hum, let's move on to someone else?

And then some little tidbit about their life jumps out from seemingly nowhere, and suddenly we're hooked. Our imagination gets fired up. Is that true? Wow, I want to learn more.

Can you tell? This happened to me earlier in the week.

The story that caught my eye ran in last Sunday's paper (yes, we still get the Sunday paper delivered). It was about a fifteen-year old boy, a youth who stood less than five feet tall and weighed a mere 115 pounds. The year was 1837. The setting was outside the village of Georgetown, located 42 miles east of Cincinnati. The scene unfolded at White Oak Creek, at the bottom of a high gorge west of town.

The task? Move a rock for the local physician. But not just any rock. The doctor had chosen this particular one to be the doorstep to his office--and had had it cut by area stone cutters out of Ohio limestone in the gorge.

(I have to pause to ask, why go to all this trouble for THAT specific rock? Why not just any old flat rock? The answer to that remains a mystery.)

Anyway, choosing and cutting the rock was only the first obstacle. The second was the fact that it needed to be moved out of the deep creek and up a steep, winding road to town--a full mile away.

Oh, and did I mention the size?

The rock, since this is a true story, has been measured and weighed by the Ohio Historical Society. Are you ready? It comes in at a whopping nine foot long, forty-three inches wide, and seven inches thick--and weighs 2,540 pounds! A ton, and more.

Back to this fifteen year old boy. When the stone cutters, five of them, told the doctor that the big stone was too heavy to pick up and move onto a wagon, the boy told the doctor, "I'll move it." As the story goes, the doctor laughed at him and said, "No way you can do this."

Well, of course, he did.

I can't explain all the details, but this kid--who, as it turns out, was used to hauling stones since he had had his own hauling business since he was eight years old and also was turning into quite the horseman the way he could handle horses--moved that rock. His method had something to do with chains and ropes, and trenches in the creek, and strapping that rock to the underneath of the wagon bed just enough to clear the ground. The wagon was pulled by a team of two horses. One wagon, two horses, and a scrawny teen. It's too much to grasp. But you can read all about it here at As the Story Goes... by Dennis Borgman of the Cincinnati Enquirer. Fascinating story. The article includes a photo of the real rock. Mine, above, is just a marble in the creek at the back of my house in comparison.

So now the reveal: the boy who surprised the whole village with his monumental feat was Ulysses S. Grant, later the Union general credited for ending the Civil War and the 18th President of the United States.

Who knew he was this kind of kid? 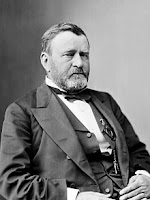 Anything we might read of Ulysses S. Grant will probably contain some controversy. He was a hero. He was a butcher. He was quiet and reserved. He was difficult and demanding. He was a devoted family man. He was a driven man. He could be depended on. He drank too much. He was a uniter. He was a divider. The list goes on and on. But he was a man who can be credited for helping to free a people and to hold a nation together. How much of the boy who could strategize the move of a rock that weighed more than a ton was in the man who planned battle strategies that ended a war? I don't know all the answers, but I do know I want to learn more. Oh, boy. More books to add to the to-read pile.

That's what I've been thinking about this week. How about you? Any fascinating historical figures you've come across lately? Any you want to read more about--or even write about?


Want to see the rock? Grant's rock was moved to his former boyhood home in 2012. The home has been restored, and the Ulysses S. Grant Homestead Association provides tours. Location: 219 East Grant Street, Georgetown, OH.