"A good snapshot stops a moment from running away." --Eudora Welty

Have you ever reached for your camera and taken a series of random shots with no real idea of what you've captured until you check the results later? I did--and this is one of the images I got. Believe me it was truly random and serendipitous. I couldn't have staged anything this comical on my own.

Littlest granddaughter and I were just hanging out together while Grandpa entertained two older siblings elsewhere. I grabbed the camera and snapped away as 15-month old Cecy played, tottered around, rolled on the floor, climbed on and off a tyke-sized bike, giggled and flashed endearing smiles. Before long she was into the Sunday paper still strewn on the floor, picking up a section here, discarding it there. I had no idea what print was on the back of the section she held up until I checked my photo roll later.

And there it was. A moment caught, as Ms. Welty said, before it could run away. Along with a funny story to tell.

Hmmmm...If I were to tell a story from this photo, what might be the log line? If I chose it for a writing prompt, what ideas would I run with? What would  be a good caption? Oh, the potential! Snapshots and story--they can work together in a creative way.

Do you rely on photos for writing inspiration? Do you post favorites around your writing space to keep you inspired? Do you use pictures for writing prompts? It appears a good number of writers do by the looks of Pinterest boards, including: Pictures as Writing Prompts, Writing Picture Prompts, and Picture Writing Prompts.

What Inspires Your Setting?

"For most novelists the art of writing might be defined as the use to which we put our homesickness. So powerful is the instinct to memorialize in prose--one's region, one's family, one's past--that many writers, shorn of such subjects, would be rendered paralyzed and mute." --Joyce Carol Oates

The sky was magnificent on my walk the other day (glad I had the camera with me!)--and for some reason it seemed to draw me into my surroundings in a way I hadn't experienced before. Thoughts began to flow. Suggestions whispered. Possibilities for connecting dots in my story leaped forth. What fun. I didn't know "they" lived over there! Who would have guessed "that" character's house was just around the curve? And the pine grove between the two? Turns out, it's begging to be included, too.

Of course, the actual setting in my story will be fictionalized, but my, how my neighborhood is helping me "see" it. I can pretend I'm walking in my character's shoes as she lives, struggles, fights for that which is most important to her--all while being drawn into the drama and misfortunes of the times in which she lives (it is historical fiction, after all).

"If you're lucky," writes Elizabeth George in Write Away, "the place in which you live is a place that resonates with you. If that's the case and if you can remain alive to and aware of the details that make that place unique, you should certainly consider using it for a setting because you'll more than likely be able to render it and not merely report it."

This works for the writer in me that immerses herself in an era of history. But what about the writer who builds her own world, fictionalizes a setting far different than her own reality?

It's all in the details. As Donald Maass says: "The great novelists of the past and the breakout novelists of today employ many approaches to setting, but all have one element in common: detail. A setting cannot live unless it is observed in its pieces and particulars."

Alex, at Write World, contrasts the advantages of real locations vs. fictional settings in his article, "Location, Location, Location: The Fundamentals of Choosing a Setting." In it he says, "There are two sides to setting: logistics and soul. If a character gets on a specific bus route, it's probably a good idea to research if such a bus actually exists, but this is only one side of writing about setting. The part that is infinitely harder is understanding the spirit of location, what makes it tick, what motivates its citizens, and how this culture matches your story. Whether your place is real or made-up, this will be your greatest challenge in writing setting."

"Real location" writers and "world builders" have more in common than not.

Additional tips on setting come from Moira Allen's "Four Ways to Bring Settings to Life" (at writing-world.com) where she suggest we reveal setting through motion...a character's level of experience...the mood of your character...the senses.

And what about the writer's own setting--the place in which we actually write? Take a look at Joy Lanzendorfer's Writer's Digest article, "5 Writing Lessons Inspired by Famous Writers." Ms. Lanzendorfer garnered inspiration by visiting the homes of such writers as Jack London, William Faulkner, and Emily Dickenson. A sample:

"In 1879, Robert Louis Stevenson stayed in a hotel in Monterey, CA, after traveling from Scotland. He didn't write anything of note while there, but the scenery, Spanish influences, and a local legend about buried coins later went into his most famous book, Treasure Island."

What has inspired your settings? What locations have influenced you? Do you draw from real places or build your own worlds? And have you written out of homesickness as Joyce Carol Oates suggests, or drawn from the deep well of imaginary places? 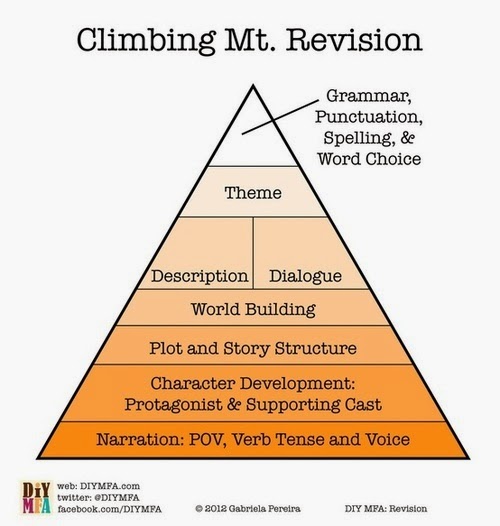 The mountain called revision looms and the climb seems insurmountable, but wait, there's a map! Like the intrepid mountain climber, we start at the base and work our way up.

I came across this neat infographic by Gabriela Pereira on a great resource site: Jody Hedlund's Pinterest board, "How to Edit." So many inspirational pins can be found there for those of us in the revision process.

And yet, Jody's site is only the tip of the iceberg (I mean, mountain) since I linked there after first discovering The Write Life's "20 Inspiring Pinterest Boards for Writing" where Jody's board is listed. Talk about resources! You can get lost wandering through all the neat links.

I'm tempted but better restrain myself. After all revisions are calling.

James Scott Bell: The Doorway of No Return

"Think of it as the Doorway of No Return. The feeling must be that your lead character, once she passes through, cannot go home again until the major problem of the plot is solved." --James Scott Bell

Has my MC passed through the Doorway of No Return? Ah, that's the issue I'm addressing this week after coming across an article in Writer's Digest (January 2013): The Two Pillars of Novel Structure by James Scott Bell. In this article, Bell uses two metaphors to help explain novel structure: a bridge and a door.

A Bridge to Somewhere. Bell discusses the idea of a suspension bridge and how it represents story structure: "The key foundational elements here are the two pillars, or pylons. These pillars are set down in bedrock, allowing the suspension cables to support a solid and secure platform... Think about it: Every story has to begin, and every story has to end. And the middle has to hold the reader's interest. The craft of structure tells you how to begin with a bang, knock readers out at the end, and keep them turning pages all the way through."

The Doorway of No Return. This, according to Bell, is the first pillar of the bridge. "The beginning of a novel tells us who the main characters are and introduces the situation at hand (the story world). It sets the tone and the stakes. But the novel does not take off or become 'the story' until that first pillar is passed. Think of it as a Doorway of No Return. The feeling must be that your lead character, once she passes through, cannot go home again until the major problem of the plot is solved...There is no way back to the old, comfortable world." She will not be able to turn around and go back across the bridge the way she came. She has no choice but to go forward.

"And," Bell says, "the timing of the first pillar should be before the 1/5 mark of your book." That means our character needs to hit that bridge running. There is no place for hanging back or dawdling on that bridge.

The Second Pillar. This pillar is another doorway of no return, according to Bell. It makes possible or inevitable the final battle and resolution. "Remember, the first door has been slammed shut...Then the second pillar, or doorway, happens. This is often an event that feels like a major crisis or setback. Or it can be a clue or discovery. Regardless, it pushes the lead character into Act 3." Our lead character must go through that door, too, with no hope of return to what used to be--but, at the same time, this door becomes her access to the final battle and the story's resolution on the other side.

The Other Side. "The two pillars of structure will never let you down. In defining the three acts of your story and creating points of no return for your characters (and your readers), they will guarantee that the platform of your story is strong. And they will free you to be as creative as you like with the elements of your story--characters, voice, scenes, without fear of falling off a rope bridge into the Valley of Unread Novels."

This week's assignment: build a page-turning bridge of a story with strong pylon doorways of no return at both ends. And while you're at it, don't look down. That valley of unread novels doesn't have your name on it. The story of your character's exciting, completed journey does!