Magic of Poetry, and Writer-In-Residence

"Poetry is an art that exceeds any kind of pinning down. You can't do it. How do you teach that? It's challenging. It's an art form that's wide open but magical." --Jeffrey Hillard

Magical. I hadn't thought of the word in relation to writing poetry before, but once the word was voiced, I knew it was true. Of course the same could be said of any writing since you don't know starting out what surprises will come with the ending, but I think it's especially true with poetry.

The epiphany came over the weekend when hubby and I ventured downtown to Cincinnati's main library to hear Library Foundation Writer-in-Residence Jeffrey Hillard speak. Mr. Hillard is a gifted poet, novelist, editor, and college professor, and author of four books (with three more scheduled for upcoming releases). He is also a great advocate for local and regional writers.

What a great way to spend an hour. Could have spent a couple more!

1. "Poetry is an extremely experimental enterprise." (Translation? Don't worry about the right and wrong of writing poetry, just try your hand--and heart--at it.)

3. "The first line is most important. It produces a kind of jumping off point."

4. "Three important things to kick around when writing a poem: imagery, sounds, shape."

5. "A poem will go through a myriad of changes. Think of the process as 're-entering' a poem, not revision."

6. "Re-enter and try to shape differently than what it currently is--extend lines, shorten lines. Don't be afraid to tinker with it."

7. "Step back, go back, give it a day. Later it might scream to go a little further."

8. "Experiment. This empowers the next draft with more energy or insight. Find out what the poem wants, not what you want."

9. "Ask yourself, is there a part two? Maybe more lines or maybe the poem actually starts in the middle of the last draft?"

10. "How can do you know a poem is done? You really can't know. Take the version you like."

Oh, my. There's more freedom in poetry than I ever realized. It is...well...a wide-open, magical art! I think I'm going to dabble in it a little more this year.

Along with that, I'm going to check out some of the books Mr. Hillard recommends, including:

The Poet's Companion: A Guide to the Pleasures of Writing Poetry (Laux and Addonizio)
A Poetry Handbook (Mary Oliver)
In the Palm of Your Hand: The Poet's Portable Workshop (Steve Kowit)
A Note Slipped Under the Door: Teaching from Poems We Love (Nick Flynn)
Creating Poetry (John Drury)
The Art of Syntax: Rhythm of Thought, Rhythm of Song (Ellen Bryant Voigt)
Best Words, Best Order: Essays on Poetry (Stephen Dobyns)
The Art of Description: World into Word (Mark Doty)
The Poem's Heartbeat: A Manual of Prosody (Alfred Corn)
Proofs and Theories: Essays on Poetry (Louise Gluck)

How does the upcoming year look for you? Any new writing adventures waiting to be tackled? Any epiphanies in setting goals? Is there poetry in your cards? Are you looking for a little magic?

A Butterfly Quilt and How It Came to Be

"Take your needle, my child, and work at your pattern; it will come out a rose by and by. Life is like that--one stitch at a time taken patiently and the pattern will come out all right like the embroidery." --Oliver Wendell Holmes

A treasured quilt it is, one handed down to me from Mom's collection following her passing last month. I'm sure every quilt has a story--starting with the artist seamstress that stitches it, the choice of fabrics, the reason for choosing the design--but this butterfly quilt made with antique handkerchiefs has special significance for me. And a generational story.

For, you see, three of the handkerchiefs (first row, middle and right; second row, yellow, left) originally came to the family by way of a young American soldier serving in France during the Great War, World War I.

The young man was Charles, my paternal grandfather. We don't know if he mailed the handkerchiefs ahead or carried them home with him--in jacket pocket perhaps or steamer trunk?--but we do know the intended receiver. He purchased them for his mother. I like to imagine how she must have cherished them, special mementoes not only of a son's love but also of his safe return. How many nights might she have cried into a handkerchief over her worry and concern for him? Went to the mail box to watch for letters?

The handkerchiefs eventually came into my dad's possession, and Mom, the quilter, often talked of using them in a quilt pattern somehow. So strong was her desire to make the quilt, she and I visited a couple of antique stores once trying to find more handkerchiefs to fill in the number needed.

Fast forward to the present, and the finished product. Isn't it beautiful? But I found out something more about this quilt and the hands that stitched it.

We writers have a special relationship, don't we, with our writer friends, critique partners, writers' groups? So, too,  I found, do quilters. I had occasion to talk with one of Mom's quilting friends, Pat, at the funeral and learned that Mom's butterfly quilt was a joint project. Several sets of hands worked on it together, along with my mom. 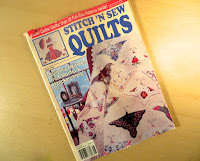 "Oh, yes," Pat said. "We often met down at the Golden Hobby Shop (German Village/Columbus OH) to quilt. There were seven or eight of us that quilted the butterfly one. You know, we always loved getting together. We all were like sisters. We laughed together, shared our worries and our joys with each other, supported one another through many things." Days later, Pat even mailed me the quilt pattern magazine that the 'girls' drew their inspiration from (June 1990 Stitch 'N Sew Quilts)! 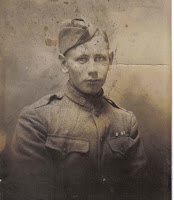 Grandpa could never have imagined the expanded joy his handkerchiefs would bring--not only to his mother, but also to a group of ladies many years later who loved each other and who then made it possible to pass into the hands of another generation those same handkerchiefs in a unique form. No, he was more the 'pick-up-a-wiffle-ball-and-play-with-the-kids' kind of guy. Nor, I'd guess, would he have been aware of the amount of work it takes to create such a quilt. Pat tells me that it can take 300 hours to stitch a regular-sized quilt, 400 hours for a queen-sized spread, 500 hours for a king--and the process can use as much as two football field-lengths of thread. That's a lot of stitches!

Do you agree with Mr. Holmes when he says, "Life is like that--one stitch at a time taken patiently and the pattern will come out all right like the embroidery"?