On Creeks, Mucking Around, and the Writing Process

"People sometimes ask me to quantify how much time I spend in the different stages of the writing process. That's a tough question. If you held my favorite teddy bear hostage and forced me to answer, I'd say roughly 5% goes to Pondering and Mucking Around, 15% is spent Scribbling, 70% is Boiling Down the Bones, and 10% is figure out how to Craft Chords and Singing." --Laurie Halse Anderson, madwomanintheforest

Adventures in the creek happen occasionally around here when hubby takes grandkids exploring. This was the case recently (kids ages 8, 6, and 4). They think it quite a lark--at least this time of year when the mosquitoes haven't come out yet.  There are stones to overturn, salamanders to find (they call them geckos), elusive crawdads to search for, splashings, rock skippings,  and balancing acts on tipping rocks. Although they did bring usable footing for the occasion (rubber boots, crocs, and flipflops), they still came in the house with wet pantlegs and dirty feet--and of course stories to share. But that's par for the course when mucking around in the creek on a Sunday afternoon. (photo sans kids: an after-the-fact re-creation since neither I nor my camera accompanied the original exploring party)

Laurie Halse Anderson (above quote) divides her writing process into percentages, saying that  5% of her process is spent "pondering and mucking around." Doesn't that tell it like it is in the first stages of writing? I love her creative way of describing her practices and found these treasures when I visited her blog at madwomanintheforest. And what prompted me to go there? I just finished reading her fantastic Seeds of America Trilogy (Chains, Forge, and Ashes), was moved and inspired by the stories, and wanted to learn more about the author.

About the Seeds of America Trilogy, from Amazon: 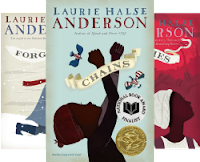 "What would you risk to be free? It’s 1776 and Isabel, Curzon, and Ruth have only ever known life as slaves. But now the young country of America is in turmoil—there are whisperings, then cries, of freedom from England spreading like fire, and with it is a whole new type of danger. For freedom being fought for one isn’t necessarily freedom being fought for all…especially if you are a slave. But if an entire nation can seek its freedom, why can’t they? As war breaks out, sides must be chosen, death is at every turn, and one question forever rings in their ears: Would you risk everything to be free? As battles rage up and down the Eastern seaboard, Isabel, Curzon, and Ruth flee, separate, fight, face unparalleled heartbreak and, just like war, they must depend on their allies—and each other—if they are to survive..."

Loved this series. Ms. Anderson is also the author of the award-winning YA contemporary novels Wintergirls, Twisted, and Speak, along with numerous other books.

She is an engaging writer. And it's always a treat to get a glimpse into a successful author's life. She elaborates on her methods in her post, "The Bones of the Writing Process--Part 1", where she describes the stages of her writing process as:


Of Mucking Around, she says: "When the idea takes solid shape--I know a bit about the character and I think I know a couple of the book's important moments of conflict--I start jotting things down. I play a lot of 'What if' games and start exploring the relationships..." (note the word exploring!) Of Scribbling she means the first draft. Of Boiling Down the Bones and Crafting Chords: "Let me explain that last 80%. It's rather important. Other people call it Revision."

And Singing? "You've got chords now so you can sing! With your imagery in place, with your plot and character development in place, now you can really plunge into the vast ocean of language and come up with precisely the right words to elevate your prose to a new level."

I don't suppose she had creek beds and salamanders in mind when she visualized this imagery (though maybe she did!). But her words help us traverse the rocky streams of writing and come out of it with a sense of discovery, and with our own stories to share. I've done my share of mucking around in this latest project, but that's okay. I'm like a kid making discoveries in the creek. Although I am looking forward to hearing those chords sing.

How about you? What stage are you in? Have you read any of Ms. Anderson's books? Do you have a favorite series of books you would recommend?

"It was one of those March days when the sun shines hot and the wind blows cold: when it is summer in the light, and winter in the shade." --Charles Dickens, Great Expectations

It was one of those kind of March days around here today. Mr. Dickens (1812-1870) hit it right on the mark from where he wrote all those years ago. His description makes me want to revisit his books. It's been many years since I've read either Great Expectations or A Tale of Two Cities. I'm thinking maybe it's time?

Opening words to whet the appetite:

Great Expectations: "My Father's family name being Pirrip, and my christian name Phillip, my infant tongue could make of both names nothing longer or more explicit than Pip. So, I called myself Pip, and came to be called Pip."

If you were to revisit a classic, which title would you choose? What about the classics is special to you? How are the opening lines of your books (short stories, poetry, memoirs) coming along?