Wild Geese, Flying Feathers, and Story of the Week

"Take any writer you want in the 19th century: they wrote with quill pens, dipping a piece of goose feather in ink and writing. And yet we read those novels today, and if we're sensitive to them, we respond to them with an immediacy that is stronger than anything written today on a word processor." --Walter Murch

I didn't write with a goose feather this week, but I did see geese feathers fly--and up too close for comfort. I raise the question: are wild geese really wild? The answer: ummm, can be (visit youtube for evidence). Thankfully, as it turns out, I didn't have to find out first hand.

It started out with this guy on the neighbor's roof. I was on my morning walk. The goose was trumpeting the neighborhood with his squawking as I approached. Interesting, I thought, though I've seen geese on roofs before (particularly on the barn next door, chronicled here). No big deal, really, but still I snapped a picture on my cell phone camera anyway.

Then came an answering call, and I looked up ahead and saw two additional geese strutting across the road. I heard a car approaching from behind me. Surely the two will take the hint and fly off? 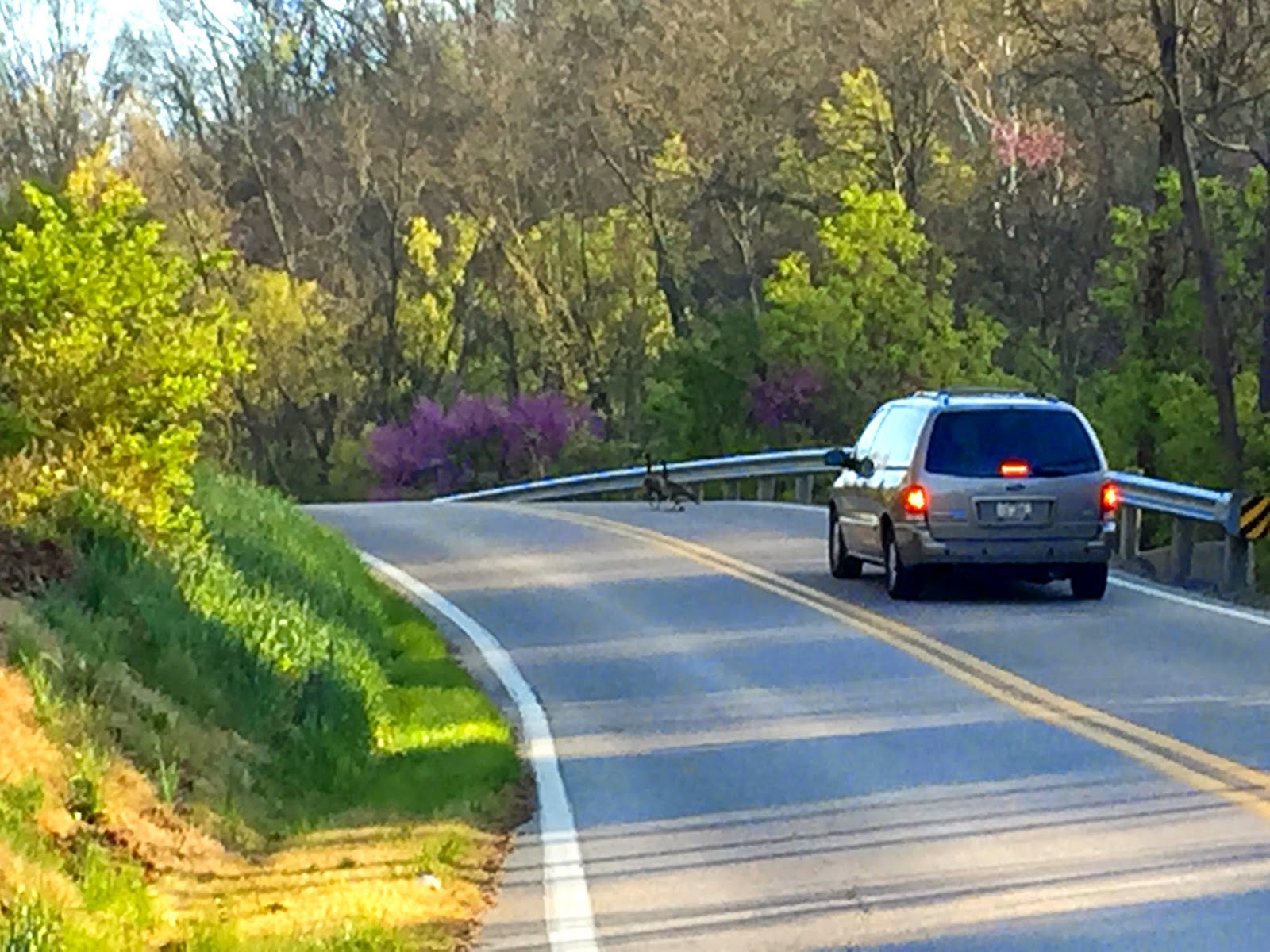 Well, no. In fact they began heading my way. At this point I'm actually chuckling a little. 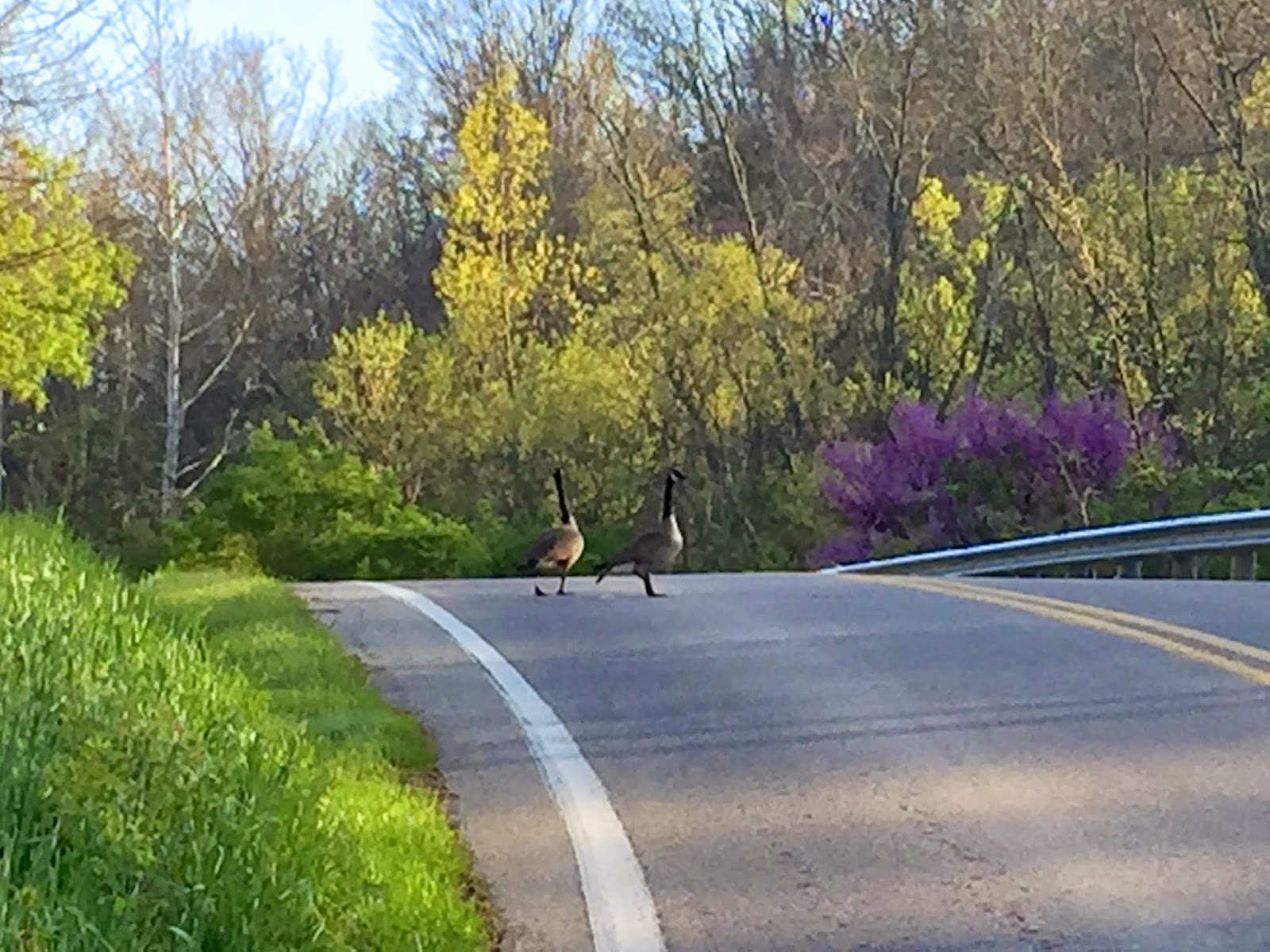 But in seconds I begin to think maybe this isn't so funny. Not only did they come toward me, they made it clear they were agitated by MY presence. 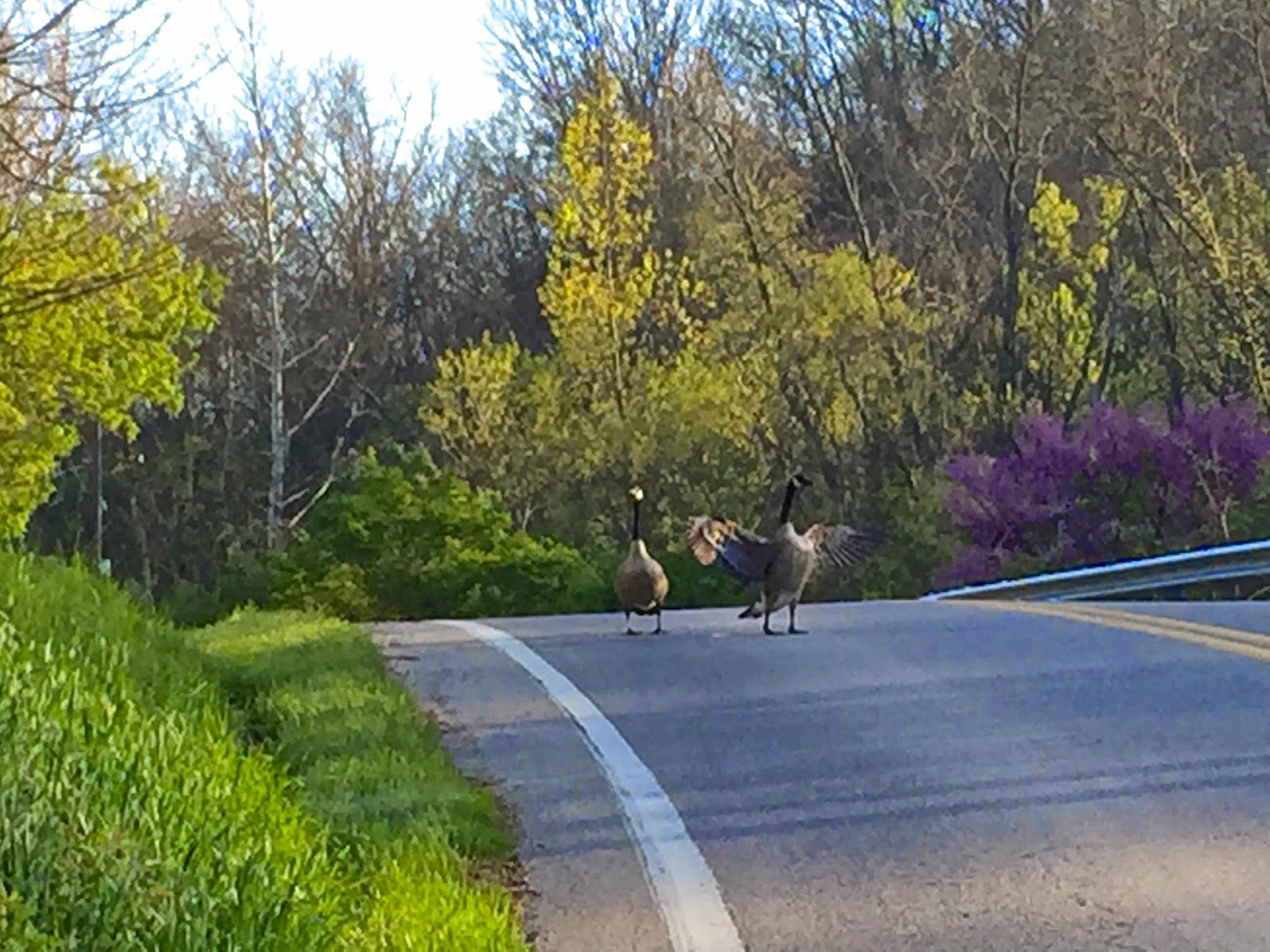 I began to get a little nervous. "Go away!" I hissed (a sound not to be confused with their hissing). 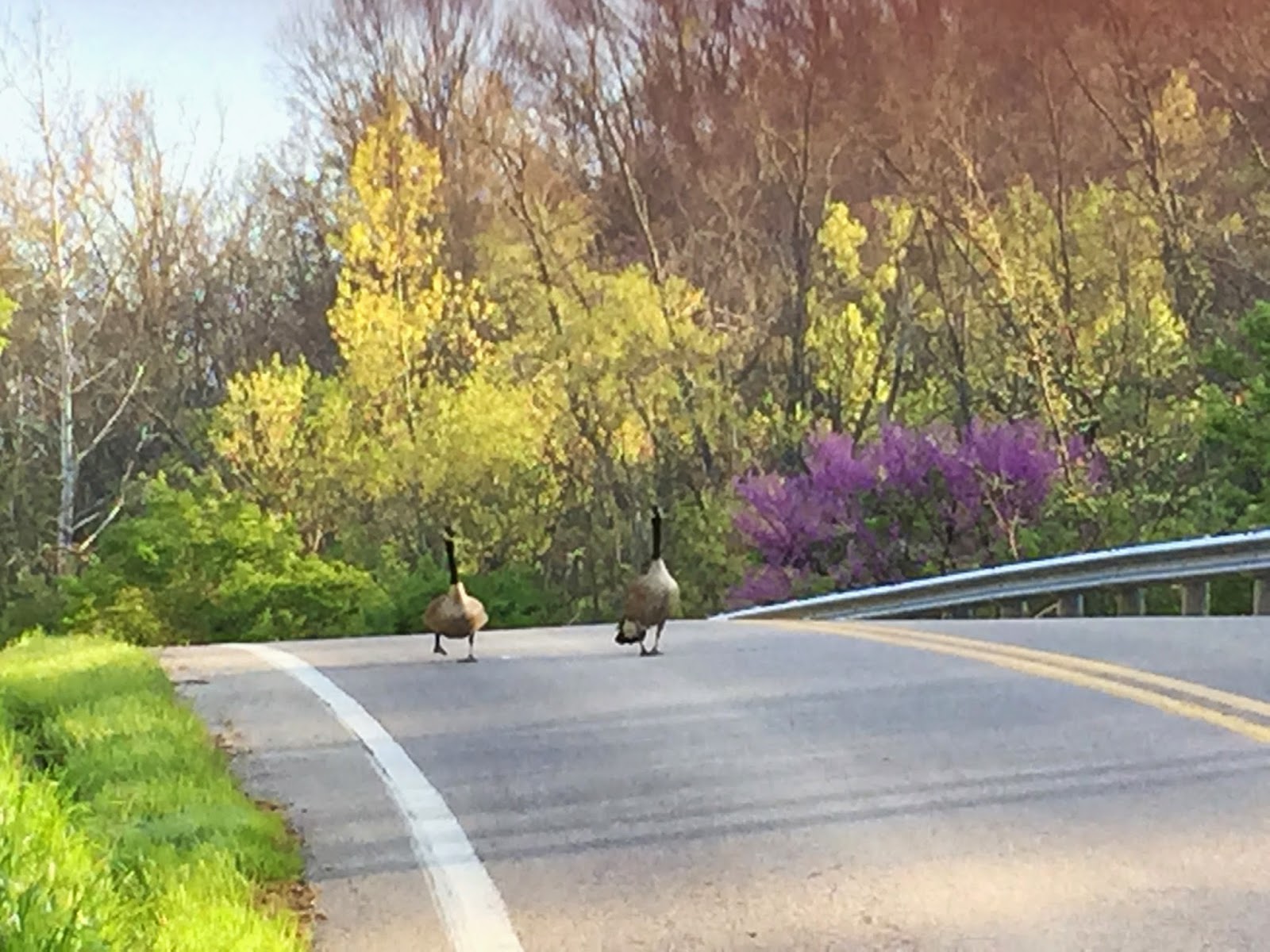 They continued to advance. By this time I'm thinking maybe this isn't going to turn out so good. I backed up then turned away, hoping against hope they'd finally retreat. Then (oh, and btw, I'm not taking pictures at this point anymore), I heard the first goose--the scout on the neighbor's roof--squawk really really loud as it flew off. An ominous rustling sound, webbed feet on the ground and frantic wing action on the wind, ensued. I was sure I was a goner at the hands of three geese.

Just at that moment, I felt the wind rush over my head, and the three ascended and passed overhead almost near enough for me to touch them. At least that's how close it seemed. They flew a distance away AND THEN circled back over! Not once, not twice, but three times they did this, honking all the while. I mean, they really didn't want me there.

Finally they disappeared in the distance and I could breathe again.

Well, now I know: geese can exhibit aggressive territorial behavior, especially if their nest and young are near (wikipedia), and they have been known to charge and can inflict bruises with their beaks and wings (Living with Wildlife). Students were forced to take cover from an angry mother goose on the campus of the University of Warwick (Daily Mail), and employees at Hewlett-Packard, Boise, Idaho once got a memo titled "Boise Site Communication: Avoiding Geese Attacks" (Huffington Post).

So I count myself lucky to have gotten away unscathed. I think I'll choose a favorite 19th century novel to read--Emily Bronte's Wuthering Heights comes to mind--and seek to regain my equilibrium.

While I have no plans to continue my WIP with a goose quill pen, I might find myself wishing to pluck a few feathers.

Any exciting stories from your week? What's your favorite 19th century novel?


"Most of the basic material a writer works with is acquired before the age of fifteen." --Willa Cather

Today, April 22, is National Earth Day which, along with its original intent in the environmental movement, is special over this way because hubby and I met on the very first Earth Day 1970, (ahem...) 45 years ago. April 22 is also National Girl Scout Leaders Day and National Administrative Professionals Day (source: National Day Calendar). Somewhere along the way I also saw where the month of April is not only National Poetry Month but "Distracted Driving Awareness Month."

But what I'm celebrating today is National Jelly Bean Day. (Check out the link for ideas on how to celebrate!)

Yes, Jelly Bean Day, April 22. Jelly beans can be celebrated anytime, of course, since it's like they bring their own party to town when you eat them, but it is nice they have their own day. For me however they carry special significance--and not just because they are a favorite candy. That fact was proved this past Easter season when I gave into the impulse to eat more than I should. Thankfully the stash is finally gone.

No, it's because I am transported back to the five-year-old-me whenever I eat them--and all because of a dress. 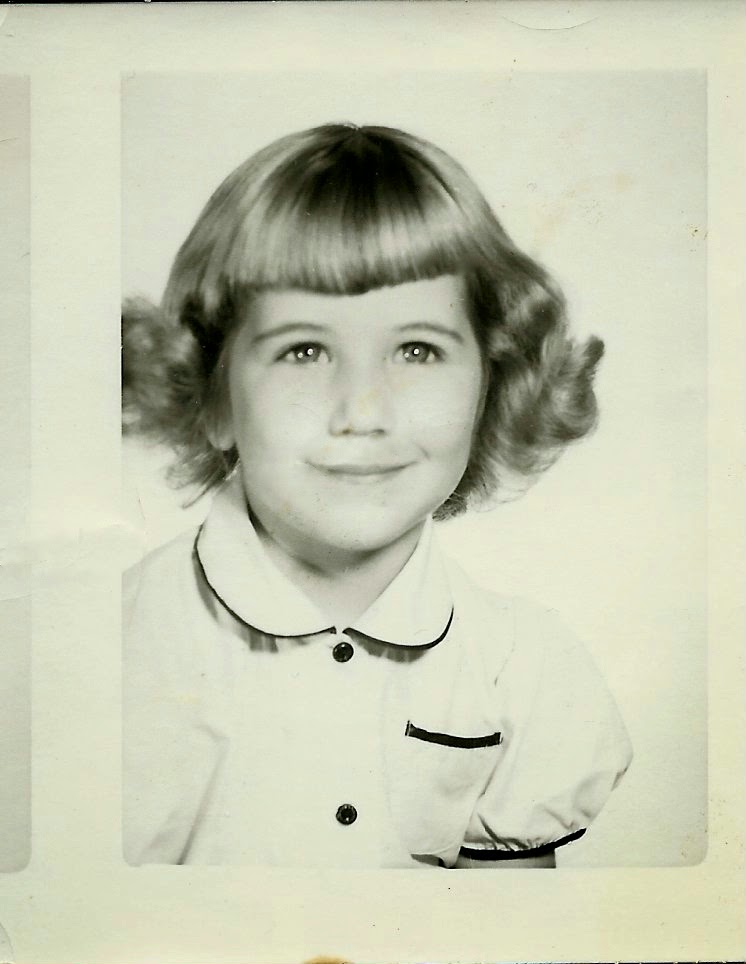 I can still visualize it. The top was a pale pink trimmed in black piping, pretty basic and plain. But it was the skirt that was special. Oh, the splash and array of those colorful jelly beans floating and skimming and swirling on the black background. Mom said it was all she could do to get me out of that dress as a kindergartner. She said she washed it out in the evenings so it would be ready for me to wear the next day...and the next...and the next. I wish the school picture that year captured the whole child and not just the typical portrait setting. For there it is, in this picture, sans the skirt. But the memory is forever in my head. Isn't it interesting the things we remember?

And speaking of interesting, in reading up on jelly beans I discovered that the confectionary actually came into play during the time setting of my WIP--the Civil War era. According to Jelly Belly's Origin of the Jelly Bean: "The exact origins of the jelly bean are lost in time, and only a part of its history is known. Most experts believe the soft center is a descendant of a mid-Eastern confection known as Turkish Delight that dates back to pre-Biblical times. The shell coating is an offspring of a process called panning, first invented in 17th century France to make Jordan Almonds for the Royal Court...Somehow the two processes made their way to America. The earliest known appearance of a jelly bean is a 1861 advertisement for William Schrafft of Boston that promoted the sending of jelly beans to soldiers in the Union Army during the Civil War."

Ah, will I use that tidbit of history in my story? Who knows--it hasn't made its way in yet. But it does pique my interest and I wonder... Is it a tempting idea because it could be integral to the story or because in my childhood I had a jelly-bean dress? Is it part of discovering my story, or because nostalgia drives the idea and I want to make it work?

Was Willa Cather right in saying most of a writer's basic material is acquired before the age of fifteen? Hmmm, something to think about.

Have you found any surprising tidbits lately that you are considering adding to your story? Are there any leftovers from your childhood that have find their way your pages? (Hopefully they don't include any stale jellybeans!) What is your favorite flavor of jellybean?

Clear the Deck: What Creativity is Not

1. Fear of failure. "An essential aspect of creativity is not being afraid to fail." --Edwin Land

4. Negativity. "Negativity is the enemy of creativity." --David Lynch

5. Self-imposed limitations. "People put limitations on their creativity, believing they have to rely on what they know and what they have done." --Bertrand Piccard

8. Lack of curiosity. "The creative person wants to be a know-it-all. He wants to know about all kinds of things--ancient history, nineteenth century mathematics, current manufacturing techniques, hog futures. Because he never knows when these ideas might come together to form a new idea. It may happen six minutes later, or six months, or six years. But he has faith that it will happen." --Carl Ally

I'm sure there are many other things that creativity is not, but for starters, let's clear the deck of fear, self-consciousness, negativity, limitations, lack of curiosity. There's too much to enjoy in writing to be bogged down with those kinds of hindrances!

What on the cluttered deck of your writing holds you back?

Up for Discussion: How Do You Define Creativity?

"Creativity involves breaking out of established patterns in order to look at things in a different way." --Edward de Bono