"It's the sheer act of writing, more than anything else, that makes a writer." --John Gardner
﻿ 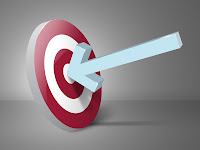 ﻿Call it semantics, but I've decided to set writing "targets" rather than resolutions for the new year. The "dart board"--what I'm aiming for--is to write every day. No matter how much, how little--my goal is to hit at least one of four targets every day. Each is represented by the graduated concentric circles of a dart board. (I wish I could diagram this, but such design skills aren't in my repertoire yet!)

The four targets include:
1. The Bull's Eye: Write 1000 words. I hope to hit this mark more often than not in this new year. But that is the real prize, and often hard to attain. So if circumstances--like life's challenges away from the computer--preclude this then I'll aim for...

2. The Inside Ring: Write two pages. Linda Sue Park, author of the 2002 Newbery Medal Winner A Single Shard, in an interview over at Cuppa Jolie, said: "My most valuable tip came from Katherine Paterson, who wrote in an essay about how she tries to finish 2 pages a day. I read that when I was starting work on my first novel, and it was a huge light-bulb moment. I thought, I can do that! I don't know if I can ever write a whole novel, but I sure as heck can write 2 pages a day. I've written every single one of my novels that way, and I'm positive I never would have written even one if I hadn't read that tip." Still and all, though, if time is at a premium on a busy day, I will at least shoot for...

3. The Middle Ring: Write for 15 minutes. Dan Goodwin, at Coach Creative, says: "Create every day and you get used to starting creative sessions quickly and easily. They become a routine, a habit, and you begin before you've had a chance to procrastinate. The less often you create, the harder it becomes to get started, and the more excuses and 'urgent' tasks that have to be done before you create begin to stack up...(so) start today, set aside 15 minutes, make an appointment with your creativity, and write it down. Do the same tomorrow." Yet, being realistic, on days I can't even do that I will at least...

4. The Outer Ring: Write ten words. This from Mary E. Pearson, on a guest post at Dear Editor: "When I feel like I can't move forward, I will do all kinds of things to help me keep going, like...Trick myself. I sit down to write and tell myself I only have to write ten words and then I can get up and do whatever I want guilt-free. TEN. That's all. But I have to do it every day." She says it's amazing how allowing yourself ten simple words more often than not jumpstarts the writing process and you end up writing more than you thought you would.

So there you have it, my targets for 2012. Every day, hit at least one. Now my aim might be poor at the beginning. After all, I haven't been all that consistent in the past. But with practice, who knows what will come. I'm looking forward to finding out.

What are your writing targets for the new year?

*Note: This is a repost from last year--it first ran  here--and since it generated alot of discussion back then, I thought I'd share again. Hopefully others will find it helpful now, too. Does the idea of setting writing targets help? It has for me. I'm happy to report that, although I did not hit as many bull's eyes as I had hoped to in 2011, I did hit one or another target over 250 days out of 365--which equates to about 70% of the time. My aim's getting better. How about yours?