8 Ideas for Getting to Know Your Character

"My characters write my stories for me. They tell me what they want, then I tell them to get to it, and I follow as they run. Working at my typing as they rush to their destiny." --Ray Bradbury 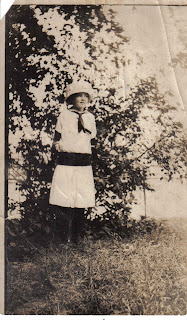 ﻿﻿﻿﻿﻿﻿﻿I know this girl. Her name is Blanche. But I wouldn't come to know her until she was all grown up and much older.


We recently came across this picture when an aunt deposited a bag of old photos and letters with my dad and told him he could do what he wanted with them. In the stack was this picture of the little girl who would later become my step-grandmother.
And I love this picture.
Of course, I loved my grandmother first. But, growing up, I knew her at a different age, in a different stage. I'm not sure, had I thought about it, that I'd have been able to imagine her as a little girl. No, she was Grandma, busy taking care of my grandfather, the stout woman in the kitchen canning beans or freezing corn. She could drive a tractor, slop hogs, clean out barns.
But who was she as a little girl?
Another photo shows Blanche with her parents and six siblings. She's a young adult, and I get a glimpse of the woman she would become. Here I'm better able to travel along in her journey because I know my dad's story and the circumstances under which she became his stepmother. But the child? I still want to know who she was. What did she like--food, friends, books? What were her hopes and dreams? Disappointments, challenges? What's her childhood story?
If she were the protagonist in my next book, how would I find out these things about her?

Ah, suggestions abound. For example, in an article titled Changing Character in a past SCBWI Bulletin (March/April 2008), Kathryn Lay suggests (1) writing your character's biography, starting with the week before your story begins. She also suggests (2) writing a newpaper article about your character, reporting how she accomplished your story's resolution. Or (3) have your main character write you a letter. What news is she anxious to share?

(4) Interview your character. For a great list of interview questions, check out this article at Gotham Writer's Workshop. A sample question I would never have thought of: "Where does your character go when he is angry?"

(5) Go Deeper. Additional sources for finding out more about your character include the questionaires at the Character Building Workshop, character worksheets at Adventures in Children's Publishing (links in the left sidebar), and Catherine Ensley's series on the Enneagram, a personality typing system that can help in creating characters. You'll find this over at Words, World and Wings.

(6) Keep a voice journal. This suggestion comes from James Scott Bell, author of The Art of War for Writers. "A voice journal is simply a character speaking in stream-of-consciousness mode. You prompt the character by asking the occasional question, and then just let your fingers record the words in the page."

(7) Dip into your character's diary. You say she didn't keep one? Well, let's pretend she did. What secrets might she have recorded there?

(8) Write "a-day-in-the-life-of..." From Creating the Story, Guides for Writers (Rule and Wheeler): "What time does she get up? What does she eat for breakfast? How does she take her coffee? By writing a detailed account, you may discover a story."

Blanche as a child is not my MG protagonist, but she is my inspiration. As I look at her picture, I imagine the questions I'd want to ask, contents of letters she might have written me, revelations in the pages of her diary. And so I want to play with these prompts, run with them, explore--and discover--all I can about my character as we start out on this adventure together.

What techniques, tools, approaches do you use to get to know your character?
Posted by Kenda Turner at 4:57 PM

Labels: character worksheets, getting to know a character, on characters, writing tips