7 Writing Tips from The Princess and the Pea

"Everything you look at can become a fairy tale and you can get a story from everything you touch." --Hans Christian Andersen 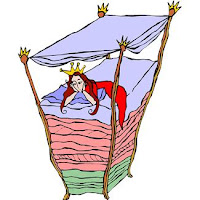 "Ouch!" I was almost out the door for a morning walk when I was forced to take off a shoe. "There you are," I said as I pulled out a tiny piece of grit. "I knew I felt something." The rock was so small it could hardly be seen, but big enough to cause a lot of grief--sort of like the princess and the pea.

Remember that story, The Princess and the Pea by Hans Christian Andersen? Paraphrased it goes something like this: Once upon a time there was a prince who wanted to marry a princess, but she'd have to be a real princess. He travelled all over to find her, with no success. Then one stormy night, there was a knock on the castle door. When the King went to find out who made such racket he discovered a wet, bedraggled girl seeking shelter--and who claimed to be a princess. Though the Queen doubted the girl's story, she ushered her in. She had a plan of course. She would put a tiny pea in the girl's bed that night--a bed made of a stack of twenty mattresses and twenty feather beds. After all, a real princess would surely feel the pea because everyone knows princesses have delicate skin. The next morning the girl proclaimed she hadn't slept all night. Something somewhere under the mattresses had kept her awake. See, she had bruises to prove it. The prince was overjoyed--here was a real princess! They married and lived happily ever after. And the pea? They put in in the Royal Museum where it is to this day, unless someone has stolen it. (You may read Hans' original story here at Childhood Reading.)

Hans Christian Andersen's story lives on. And, since one thing leads to another, I gave thought to this story, and how we writers might draw tips from it to aid us in our storytelling lives. I came up with the following seven:
1. Books are like princesses--the writing of them is a goal worth searching for, and pursuing.
2. Don't give up hope in your efforts to write that princess, no matter the storms that threaten to stop the progress. A King may open the door when you least expect it.
3. Squelch the Queen's doubts that say the idea will probably come up empty anyway, so why even try?
4. Let any irritating "peas" (you know, like rejections, less-than-perfect critiques, yet another late night session to make the words flow just right) only spur you on to doing better.
5. Trust through the bruises that your real jewel of a story will one day see the light.
6. Take it all the way to the altar--commmit to it, and do what it takes to make it work.
7. Preserve the memory of those irritating peas that helped get you where you are, so that you don't have to lose sleep over the same problems the next time!
Now I'm thinking of checking into some of HCA's other stories to see what I can glean (a list of his 168 titles can be found here)--like Thumbelina, The Little Mermaid, The Emperor's New Clothes, The Little Match Girl, and The Ugly Duckling. He was quite the storyteller (1802-1875)--a Danish author, fairy tale writer, and poet noted for his children's stories.
Just goes to show, writers help other writers no matter the genre, era, or number of years apart.
Got a favorite HCA story? Any writer's analogy that has struck a cord with you this week?
Posted by Kenda Turner at 4:29 PM