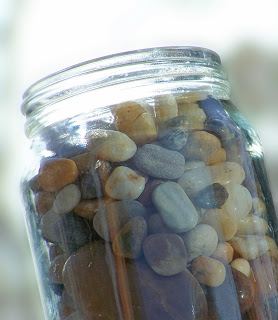 The Crow and the Pitcher
"A crow, half-dead with thirst, came upon a pitcher which had once been full of water; but when the Crow put his beak into the mouth of the pitcher he found that very little water was left in it, and that he could not reach far enough down to get at it. He tried and tried, but at last had to give up in despair.

At last, at last, he saw the water mount up near him, and after casting in a few more pebbles he was able to quench his thirst and save his life. Little by little does the trick." --Aesop

Doing NaNoWriMo (National Novel Writing Month) this year? I'm one of those not quite ready for the challenge, but I know many have signed up. I'm wondering how this, the first day, has gone for those brave souls? A goal of 50,000 words in the month of November resulting in the rough draft of a novel is amazing to me, and I admire those who persist--and conquer. Maybe next year for those of us not yet there? Maybe so!

In the meantime, perhaps Aesop's story will serve as inspiration, no matter the stage of writing we're in. If we remember that word by word, like pebble by pebble, the job gets done and the (writing) thirst gets quenched, then we'll see our dreams come true. We just have to be sure to pack a few special pebbles for the journey--pebbles like perseverance, persistence, play, patience, pep-talks, and pick-me-ups. (Throw in some pumpkin pie, and maybe we'll be pumped for the next 30 days!)

Yep, little by little does the trick. Good luck to all in reaching your goals.

p.s. You know, there really is a crow--the rook--that has been known to drop pebbles in a jar to get what it wants? Studies have been conducted that show this to be true. See Connelly do his thing here at physorg.com. Aesop really was on to something.

Labels: Aesop, NaNoWriMo 2011, The Crow and the Pitcher, writing goals