On Fiction, A Simile

"Fiction is like a spider's web, attached ever so lightly perhaps,
but still attached to life at all four corners." --Virginia Woolf

I ran across this quote recently and found myself thinking about it off and on. It's true, isn't it, how glimpses into fictional lives often link insights to our own?

How about the writer who is hanging on by a thread?

Hope that's not your case! Happy weekend, all.

"For this is the artist's great responsibility, to listen, see, feel, smell, taste. To experience everything as intensely as possible, and then report our findings." --Silas House 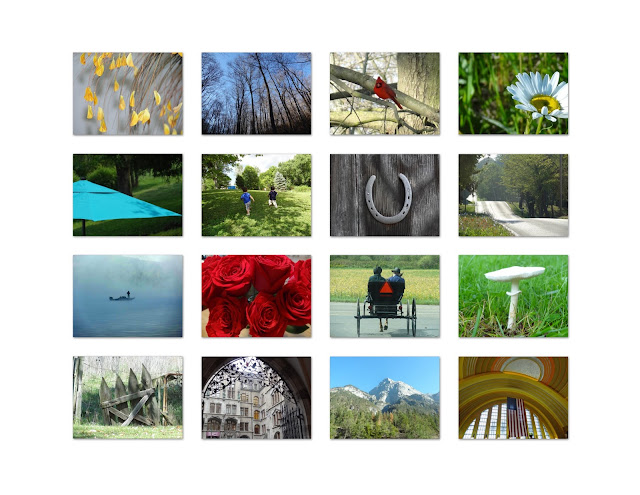 I took time the other day to revisit my photo-a-day challenge, the project I undertook last year where I set a goal to take a photo a day. On this "revisit," I wanted to see if I could narrow a year's worth of pictures to a handful of favorites. Not an easy task, but here are the ones that made the final cut--a picture for each month with a few extras thrown in.

I remember how I started the project with a shake and a quiver, fearing I had set out on an impossible task. How could I ever expect to be able to snap a picture a day? Would it be too much to ask? What if I failed to stick with it, how would I feel?

Yet, over a year later, the results are in along with fun memories, fond images and an awareness of what an extraordinary experience it was. And I like this quote by Diane Mariechild that I ran across: "Trust that still, small voice that says, 'This might work, and I'll try it.'"

I'm sure glad I did.

I'd love to hear from you on which of the above in the final grouping is your favorite, and why. Each one speaks a different word to me. I wonder what they might speak to you.

And, any daunting tasks you've ever set out to explore in which you questioned if you could stick it out, only to step back when it was all over to say, how in the world did I do that!? 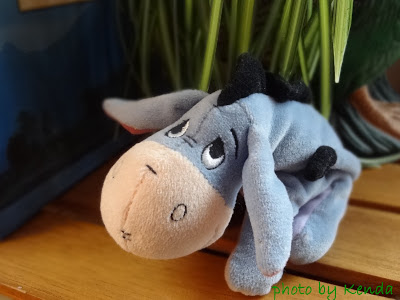 "This writing business--pencils and what-not--is overrated. Silly stuff. Nothing in it."
--Eeyore, from A.A. Milne's Winnie-the-Pooh

Where did the needle for the Eeyore writing-meter register for you this week, with a tilt toward gloomy or sunny? Mine? Mostly sunny but with a few (plot) clouds. But, like Eeyore also says, "One can't complain. I have my friends. Somebody spoke to me only yesterday."

Wishing you more sunshine than not in your corner of the writing world. Happy weekend!

"It's hard not to multitask, given all the things we have to do and all the streams of information coming at us non-stop."--Douglas Merrill

Multitasking. A word that's been around for some time, and one that expresses our sometimes-frenzied culture. There's never enough time, especially in this intense information age, so gotta' do several things at once or we won't get everything done, right?

Multitasking (n.): "the performance of multiple tasks at one time." (Merriam Webster).

I hadn't given much thought to this concept until a recent health newsletter came in the mail. The headline announced, Stop Multitasking to Improve Your Memory (Life Advice, Winter 2013).

In it, results of studies conducted by Dr.Gary Small, director of the UCLA Longevity Center and author of The Alzheimer's Prevention Program, were summed up. "A good memory requires focusing attention and getting information into memory stores so it can be retrieved later. When multitasking--switching from phone to computer to TV--information doesn't stay in the brain long enough to be retained." He also says that the belief that multitasking helps get more done is a fallacy. "Multitasking makes people sloppy and error-prone. Do one thing at a time and your memory will improve."

Turns out this has been a subject that's been studied and bandied about for some time. Titles of a variety of blog posts--and sound bites extracted from them--tell quite a story:

The Myth of Multitasking, Tyler Falk. "A new study from the University of Utah calls out all the self-proclaimed multitaskers out there. The take away? You're not as good at multitasking as you think you are."

Why Multitasking Doesn't Work, Douglas Merrill. "I know, you think you're good at multitasking. And to some degree, you are. You can walk and chew gum at the same time. Folding laundry while talking on the phone? Not a problem...This form of multitasking works because these are rote tasks that don't require much brainpower. Unfortunately, our brains just aren't equipped for multitasking tasks that do require brainpower...When you're trying to accomplish two dissimilar tasks, each one requiring some level of consideration and attention, multitasking falls apart. Your brain just can't take in and process two simultaneous, separate streams of information and encode them fully into short-term memory. When information doesn't make it into short-term memory, it can't be transferred into long-term memory for later recall...Instead of actually helping you, multitasking works against you. It's making you less efficient, not more."

Is Multitasking Bad for Us?, Brandon Keim. "It is sometimes argued that multitasking is nothing new. For more than half a century, people grew up talking on the phone while watching TV, doing homework while listening to music, and so on. The multiple, ubiquitous information streams of early-21st-century life, however, are different in kind rather than degree. If we used to ride a cognitive horse-and-buggy, now we're in a race car." Also, from a study Keim quotes, "High multitaskers were bad at filtering irrelevant information from relevant, something that, one might suppose, a multitasker should be especially good at. High multitaskers also had diminished powers of mental organization and extra difficulty switching between tasks."

The Cognitive Costs of Multitasking, Kendra Cherry. "Recent research...has demonstrated that switching from one task to the next takes a serious toll on productivity. Multitaskers have more trouble tuning out distractions than people who focus on one task at a time. Also, doing different things at once can actually impair cognitive ability." Cherry goes on to give a three-part definition on what multitasking can mean: 1. performing two or more tasks simultaneously, 2. switching back and forth from one thing to another, 3. performing a number of tasks in rapid succession.

Multitasking is Making You Stupid, Jessica Stillman. "Doing many things at once isn't just distracting--it actually takes points off your IQ, scientists say...'A study done at the University of London found that constant emailing and text-messaging reduces mental capability by an average of 10 points on an IQ test...This effect is similar to missing a night's sleep.'"

Ouch. Where do those of us who multitask on a regular basis go with information like this? Can we slow down and give full attention to the task at hand? Can we prioritize? Can we be more productive, more nurturing, more engaged in the moment? Is there a counter to the debate that says multitasking isn't so bad? Should the word "balance" be introduced to the discussion?

What about you? Do you multitask regularly? What is your definition of multitasking? Has your productivity benefited or suffered? How well is your brainpower functioning?

Just some (brain) food for thought...